We were excited to be at Timpohon Gate. Here our climb truly begins. Apparently non-climbers can also enter here, but they stop at a point called layang-layang. 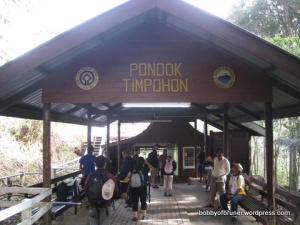 The map of the summit trail

The first few kilometer was a very easy walk. There was a few downhill walks, and you could see signboards almost every 0.5 Kilometer walk, that also tells you your altitude from sea level in brackets.

There were some nice flora and fauna on the way up. Some nice flowers can be seen along the way.

There were a few huts located almost every kilometer.

The first hut from Timpohon gate

Sometimes there were some hungry squirrels standing by around the huts, waiting for climbers to give them some food. Had to be quick to take their pictures, they were fast. It was difficult to capture them on camera. 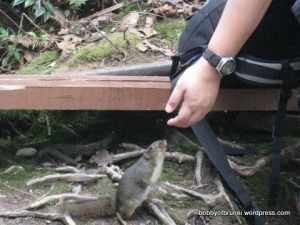 After the 3km point, things started to become a bit more difficult. At this point it’s mostly up hill. Here me and my wife had separated from the rest of the group while the rest continued on. We ate half our packed lunch and continued on.

We reach the layang-layang hut/checkpoint and rested again. This time a pair of caucasians (orang puteh :P) noticed that my wife look really tired and kindly offered her a sort of energy gel to eat. Then we continued our climb. At some point we took out the chipsmore chocolate chip cookies that we bought previously, and we were surprised to see that the package was bloated. (kinda explains my intestines)

At this point we also noticed that we were in the mist/clouds. The whole place looked surreal. My wife noted that it looked like a scene from Twilight movie. 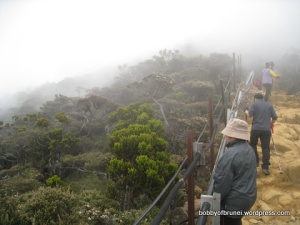 In the last 1 Km to laban rata, my wife began to have painful headaches, while I began to fill a slight one. So we had a rest almost every few steps. In the last 100 meters we were resting a lot, while letting a lot of climbers past us by. We saw other porters carrying heavy stuff going up. Our porter/guide that has been with us at this point asked permission to go up so that our friends could get their bags. He said that he would return for us. At some point it started to rain, and we had to wear our raincoats. After this I hid the camera from the rain. 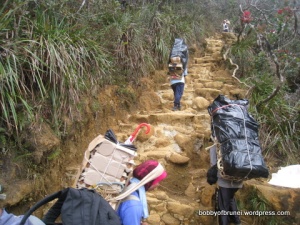 In the last few meters we saw a hut and we thought that was it, but it wasn’t. So we continued on, then we saw a building, which I recognize from the picture and the mountain behind it to be laban rata. At this point, our Porter/Guide spotted us and told us to eat dinner at laban rata and go to our accomodation at a place called gunting lagadan. My wife was too tired that she wanted to just rest and sleep, so we went off to our accomodations, then we found that the place was about 100 meters climb from the dining area at laban rata. My wife was already really tired so we still needed to take several rest stops. Then we saw one of our group members – Amir Reza, going down to have dinner, and he help motivate my wife to climb to reach the gunting lagadan.

When we arrived there, I let the female members of our group to take care of my wife while I went down with Amir to have dinner. It was a buffet, so I allowed myself to have my fill (My mistake), then we all went back up while I realized my headache just got worst. so I slowed down, but I eventually reached the hostel.

When I retuned, I found that my wife was searching for me as her headache was bad and she felt cold, so I tended to her. Then, the group wanted to have a meeting about the climb the next day, so I attended. During the meeting, I suddenly felt my headache increase and sensed  a feeling in my throat that I have come to associate with vomiting. So I calmly walked away to the closest sink I remembered, and Puked. I cleaned up afterwards while  realizing how ice-cold the water was up there. Later, After 7 pm. I slept with my wife and tried to ensure that her body was warmed. I noticed that I myself was cold (which is rare) and had to wear extra clothes while sleeping.

At Midnight I woke up, my painful headache had become mild. So I decided to eat Mee Cup to fill my stomache. I had to wear warm clothes and shoes, just to go to the kitchen. But I couldn’t sleep after that even until 2AM when we were preparing to go up the summit.

At about 2:30 AM, we were on standby to go through the gates and go up the mountain in the dark. (note that the following picture was taken going back from the summit in daylight)