The Many Techniques to Success (of half boiling an egg)

A lot of people tend to give different advises for the same problem. It depends on the individual to try out those solutions. Case in point, my half boiled eggs. 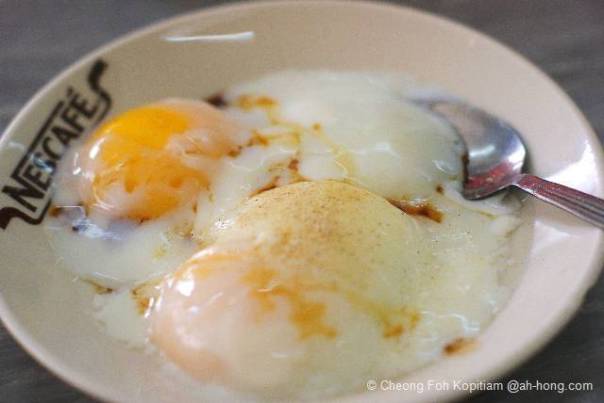 I often brought my attempted boiled egg to office, but the end result was sometimes not really half boiled. My colleagues often advised on their methods.
Here I have a few issues.
1. The solutions in some cases differ in such a way that the result would be different. E.g. 3 mins vs 4 mins boiling vs pour over boiling water. In fact, the perfect solution is highly dependent on several variables , in this case, volume of water, heat source, and current room temperature and pressure. Water can boil at lower temperatures at higher altitudes at lower pressure. Rate of heat transfer is affected by ambient temperature. (I took up chemistry as a major in uni, its funny where I apply these knowledge).
2. The solution provider may not always practice it, but they swear it works. It might work for them, But in truth it might not work for others. As these people often debate amongst each other. A consideration is they might not even boil and eat half boiled eggs often or everyday. (these might be biased due to memories just remembering the time it works).
3. They often project their own reality as universal truths. E.g. The eggs tastes better, in sweet soy sauce, bovril, butter. (I like salty soy sauce thank you). Everyone has a different taste or preference, but that doesn’t stop them from recommending. They would say “it would be more delicious if…” rather than the more accurate “I like it when…”.

You can Google half boiled egg  yourself, but i recommend you experiment your own way (almost scientifically). I previously found the perfect way for me, but since I moved house and started to use induction cooker instead of gas, I am experimenting again. The variables, volume of water (more water takes more time to heat up), the heat setting (higher heat faster rate, but not higher boilimg temp), time of day (certain times are often different temperature), the weather, time spent to boil (if u put in the eggs before boiling), time boiling, time egg left in the water after stopped boiling, and number of eggs.
Mine WAS, in the morning, wait till boiling (reducing error result from rate in boiling), then dropped in the eggs for 2-3 minutes, then remove the eggs from boiling and cool in water. (reduces error from additional heat transfer from still boiling water).
My current issue is I am trying out the lazy and quick way with timer setting on the induction cooker set to boiling. I am down to 3 minutes, but i have to watch out for level of water and number off eggs, as it affects the rate of heat transfer. The heat source is consistent, it is the ambient temperature I need to account for. Also the timer is in increments of 1 min. I can’t set for 2 and a half minute.
For the seasoning, that’s your choice.

My points here though, is that there are many solutions to Success, what works for one person may work for another, but then it might not. There are several variables we have to consider, our current status, where we want to be, and the environmental factors involved. And finally, I prefer people to share their truths, rather than project their truths as absolute truths. Saying “in my case, it was…” rather than “The right way is…”.

Good luck and have fun trying.

Posted in Health, insights, Self Development

Everyone has a choice, including having no choice. I saw a post about how some people have no choice in their sexual orientation, gender identity, appearance, disability, and race. The following text was my reply. Added a few more info in arrow brackets.

Orientation, possible, I almost saw a gay guy turn straight for this one chick, she turned him down.
Gender identity, definitely can, people can have sex change. Although xx or xy chromosome remain.
Appearance, thats what fashion and plastic surgery is for.
Disability, yeah I agree. But they can choose whether that disability defines them or not.
Mental illness, unfortunately I mostly agree, some people are just so down that they cant see the light of day even if it was shining on them. But some do get a breakthrough when they full embrace their power.
Race, interestingly, technically possible. u might not be able to change ur dna, but extensive plastic surgery and a few cultural classes, u cud act and be another race.
Truth as it turns out, is subjective. The truth I submit to is an individual can be powerful when they know they can have choices and they do something. It is more powerful to say that I am the way I am because I CHOOSE to be who I am, rather than because I have no choice. Although having no choice is also a choice.

Survival of the Moderately Fit

A while back I was researching into the rare cases of heart attacks in runners. The most classic in point was the legend of the marathon runner, Pheidippides.

It seemed that these articles referred to defects that were never diagnosed. In 2012, I saw a TedX video by a Cardiologist runner, explaining that too much running may be unhealthy.

Recently this research popped up again with Dnews.

it basically mentions the same thing, more details were available in the Tedx talk.

Based on this research, now most of my workout is often not to vigourous, maybe once a week is speed work, once a week long relax run, everything else in moderation, but at least one rest day a week. Generally runners still live 6 years longer than non-runners. But everything in Moderation. I would like to attain and maintain 10km under 1 hour.

I don’t need to run fast, I just need to run, I see myself running even when I am above 60 years. Hope to see you running then 🙂