I heard about the event from Iron Lady Wendy who joined the Open Water Swim Challenge in April. She suggested that I try it out. I registered for it a few weeks later.

In May or June, I found out a few runners were planning to do the duathlon as well, and they were just picking up cycling. So I trained with them a few times in cycling and a few brick runs.

In July, after the fasting month of Ramadhan, I picked up intermittent fasting, so I was training in the morning fasted, and training at night after break fast.

My wife was helpful in that she booked the accommodation based on the starting/finishing line. It turned out later that a few other competitors booked there as well.

The week before the event some of the others booked the ferry ticket. (I didn’t know we could do that). At first I didn’t care much, but as we reached 2 days before the event, I changed my mind  and booked an early ticket as well.

If I was by myself, I could have rode my bike to the hotel, next time either I am going by myself, or with other competitors, or my wife must have a bike as well. We were early there, so we had time to walk around to buy some stuff.

was suppose to be done at 5pm, good thing i decided to pick up my racepack around 4pm, and my buddies whatsapped in the group to share that the briefing was bumped upto 4pm. Among the changes in the rules were drafting was allowed, the route

Scheduled Start time was 6:30am, we were required to be there by 5:30am. I left the hotel at 5:30am, which only took 5 mins bike ride. Set up my bike on the bike rack according to the bib numbers, and realized how packed it would be. Later, the bike racked actually collapsed, thankfully the other cyclists around was there to keep it up from collapsing completely. Upon inspection, the bike racks were already screwed hard together that the pipes were bent. Most likely the racks were overloaded. We stabilized the rack ourselves, but when I finished my first run, the volunteers were manually holding up the rack. Notes for the organizer, either fix this racks or avoid overloading them.

Actual starting time was  6:35am, I just followed the crowd, I didn’t realize until 1km later that my pace was 5min/km! decided to slow down a bit after that, but apparently I was still too fast. climbing uphill i decided to maintain, but now looking at my data, either my heart rate monitor got loose, or my heart rate went down, meaning i was taking it to easy. probably the latter, as it was going down hill at that point.

I admit I slowed down before reaching the transition area. Wore my helmet and shoes and double checked before I rode off. I felt motivated to go fast, and overtook a few mountain bikes. (they must have been running very fast to be in front of me in the first place). and then a few people on roadbikes overtook me, and I realized that I can try to draft behind them instead. Since it was a draft allowed race. My first time being able to draft in  a race, I have to admit, I felt it was a lot easier to go faster, a few times that I felt it was too easy and tried to overtake the group, but I felt tired as soon as I tried to break away. I split and joined 4 different drafting groups. Either because I got left behind eventually, or at some point, I was able break away because I could easily climb a steep hill that they didn’t.

At some point, going down a hill and followed by a sharp turn to the right, I saw a friend who had fell down and at that point was getting back up. I was actually worried, and was thinking should I have stopped by? was she okay? Am I being selfish by just passing by to go for my personal best? Is this what it takes to be the best? ignoring other people? If it was a stranger I probably wouldn’t care, but this is a person I sometimes train with, someone that I know, someone that I <gulp>… care?  what if it was my wife? would I stop? most definitely! but why not a friend? The questions and discussion keep on popping up in my head. Especially when I passed by 2 of the friends that were accompanying her from the start, Marnie and Billah. Looking at my speed, I did significantly slow down after that turn, and only re-energized and focused after a difficult climb where I overtook a few people who couldn’t climb it, but later some of them overtook me again. Looking at that hill, the descent actually lowered my heart rate, I could have probably pushed a bit more, but I was out of gears, looks like I might need to invest in a better bike soon. I noticed according to endomondo, I was in an anaerobic state most of the time, either I need to reset the heart zone levels, or I was really there… didn’t feel like it thought, I thought I was doing peak aerobic, maybe under anaerobic level. But you know what the real kicker was? I was doing all this so far with no breakfast, and no sugar, I am still practicing my intermittent fast. If I was doing this anaerobically, where was I getting my energy? I am gonna research more on ketogenic diets and endurance sports and heart rates. 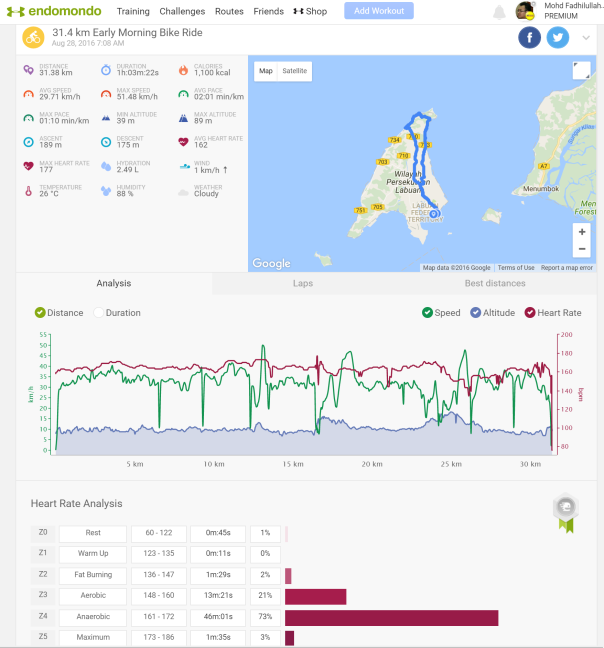 Getting off the bike, I was a bit weakened, demotivated, and started my run slow, might be the brick run effect, might be the questions popping up again, but after a few people I overtook on the bike overtook me back on this run, I speeded up a bit, but no where close to my 1st run. even the It was only after 2 things happened, Rizan Latiff was handing out energy drinks, isotonic and coke, and I took it up, and then on my way up to the mid point, I heard a heavy breathing of someone about to overtake me, and realized she was also doing barefoot! and then it hit me! this girl was panting! she is actually pushing it! my breathing was calm and relax, my heart rate was down. and at this point just about 3km left to go! I could push this, I could go fast again, and I did. When I heard my endomondo sounded off 1km left, I started to run fast again.

A few people I have met shared that they feel a mental challenge in doing endurance sports, but I don’t feel that I have that same mental challenge. I feel that given a slow pace, and no cut off time, and can go on almost indefinitely. But recently, I have been realizing, my mental challenges is not about going far, but it more on going fast. I have begun challenging that mental limit and have started again to feel the physical limits associated with it by trying to go faster than I usually go. Looking at the data of my performance, the mental challenges came up again. My second run, I should have pushed more, I was not physically tired, I was not panting, I was just mentally tired, I could have gone faster, but I told myself, I have done the first two legs of the race well, I can take this easy. It was only later I realize that I actually have the energy to go faster. I didn’t feel my legs were strained or stressed, I could have pushed it. Something I need to consider in my future training and events. So far I have mostly trained relaxed but far, I think it is time for me to train hard and fast.

Posted on 2016/09/20, in Uncategorized. Bookmark the permalink. Leave a comment.