I consider the Labuan Cross Channel Swimming as an annual pilgrimage for me to do an open water swim event. It is a 5.4km openwater swim from Labuan to Pulau Papan and Back.

In the picture above, I am pointing to the island that I am swimming to. I honestly feel like it looks closer than what I remember to be. But I know how far it is from previous experience. Notice the ships in the area. We have been informed that the ships would clear out for our path, but in past experiences the currents have pushed them  in our path. Which is the case that morning. The target is just slightly left to the centre of island, and you can see the ship was partially blocking.

There were a few changes this year compared to previous years. Previously, the kids category started of from Pulau Papan, having been sent there on a boat. This year they start from Labuan, and will be picked up by boat from Pulau Papan. Joining them are the veterans, who previously did the whole 5.4km, but are now limited to half the distance along with the kids. A few people I know my age wouldn’t have mind doing the half distance, especially beginners swimmers. The start of the swim seemed more happening as all the categories started at the same time.

A last minute change was that originally the 3 different categories were to be started 2 mins apart. But as most swimmers disagreed (I believe it is mostly due to possible cheaters or confused starts, 2 mins is a huge gap for any race) the organizers decided to flag of everyone at the same time. 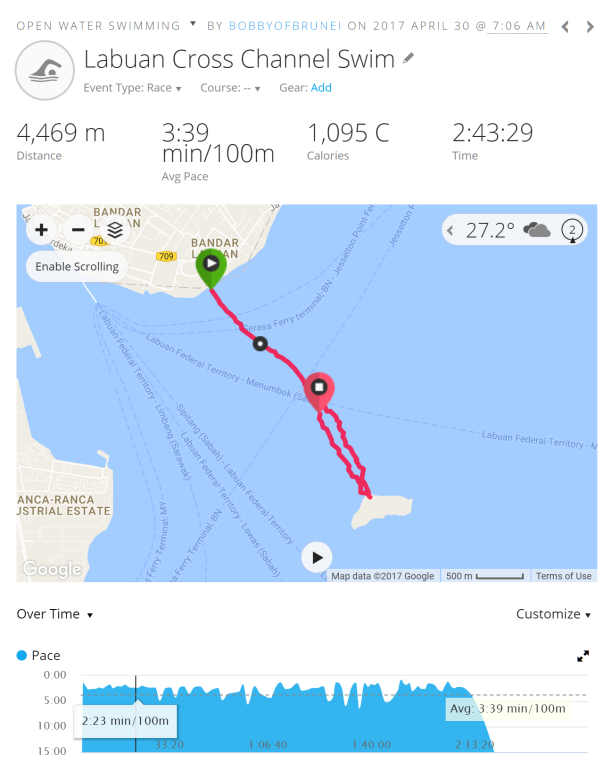 Before the start of the swim, I identified the 2 big boats that I need to sight in order to reach the island. I ignored the swim markers, knowing that they tend to be pushed by the currents, on which I noticed was being pushed to the north or left of the shore.  the first 1/3 of the swim was interesting, it was relatively clear, I could see other swimmers in the water,  and I could also see debris in the water, and I am not just talking rubbish, but the tree trunks floating in the water. It was a mine field, swimming around the debris.

At two-thirds of the swim, I could feel it was getting more difficult to swim through the currents, at some point the waves seemed coming from all directions. Possibly due to some small ship passing by or the winds blowing the big ships causing some waves. Almost to the island it always bothered me that the island doesn’t seem to be getting any closer.

As I reached the island after 1 hr 30 mins. I was wondering should I go back. 1. I was later than usual, 2. the waves were rough and 3. I was experience a few pains, including small jelly fish stings and my armpits were chaffing. at 1hr 40min, I decided to continue, hoping to that 1. the current pushing me back earlier, could push me back faster, 2. I can withstand the pain for a little bit longer. I asked the organizers there if they had any vaseline or vinegar, but they didn’t have any, it didn’t look like they even had any medic on stand by as it was available last year.

So I went, being able to see the big white tent from the island, pinpointed the ships that i can use to sight. swam back. a few times I can feel the stings from underneath my suit, and while swimming I could sometimes see small blue things in the water the size pin needle. Unsure if they are the things causing the stings. I went through the obstacles again, starting with the rough waves and the mine field. All through out, I could feel I was riding through with the waves heading back to labuan.

At some point in the middle, I felt like checking my surrounding, I stopped, looked around, saw and realized… that I was alone… no one nearby, no kayaks, only the ships. and I was 1km away from any dry land. It was worrying, and yet cool at the same time. As I checked my watched, I realized that although the time was working, the GPS was not functioning any more, which was disappointing, as it was the first time I was swimming Labuan with a GPS watch. But I carried on anyway.

On shore, I saw my wife waiting for my return. As I got out, I thought the finishing timer would be in the tent as previous times so I ran to the tent, but then I realized there was no one there recording the time, and I looked back it was the people close to the shore that was doing so. In any case, I rested in the shade before I double check with the time recorders on my official time and position. My wife took a video of me finishing the swim.

I was glad that I participated and completed the swim again this year. It was probably the most painful swim I have yet to experience. So here is a few reminders for myself as well as others when doing this swim.

I look forward to the next event. Every year it seems there are different organizers, as I do not recognize the people organizing for the last few years. But if they are reading this, then here is a few feedback.

the bad or at least to be improved.

My personal reason for coming to labuan every year is because it was my first open water swim event, and it is the easiest, cheapest and closest openwater event I can get to from Brunei.

I know a few other swimmers that have joined, and the reasons for them not joining is either the swim is too long (so if you can do half some people might be okay), or poorly marketed as most people don’t know until its too late (so the forms should be out earlier), or event is poorly organized.

In any case you need some help with organization, I wouldn’t mind helping organizing it, as I have organzied a few events before. As long as I get paid a fee, but I personally would prefer to swim the event than to organize it. 😀

Did my first sprint triathlon event of the year, back from injury. 3 months from my accident early this year. because of my injury I haven’t trained in cycling and running a lot. running not at all. Running involves a lot of shoulder movement, causing some discomfort, cycling in itself only hurts when there are bumps in the road, or when I climb up hills (while pulling on the  handle bars). But swimming interestingly was the first sport I could do, as it felt better in the water. (In fact I did labuan cross channel swim the week before :p)

Didn’t do too bad, considering the lack of training. my swimming was still strong at 14mins 20 seconds. I guess I pushed my self a bit.  before the swim I noticed that the current seemed to be pushing eastward (to the right of the shore), so I started of far from the left so I didn’t have to fight the current much, after the 1st turn, I couldn’t see the 2nd buoy (is it pronounced buwi or boy or boo-oy?) , so I just followed the line of swimmers in front of me until i saw it with my own eyes before I corrected accordingly, after the 2nd buoy, I could see the swim finish, I decided to aim for it, and if the current push me, I decided I will just have to run on the shore. Close to the shore I decided to run in the water on to the shore. 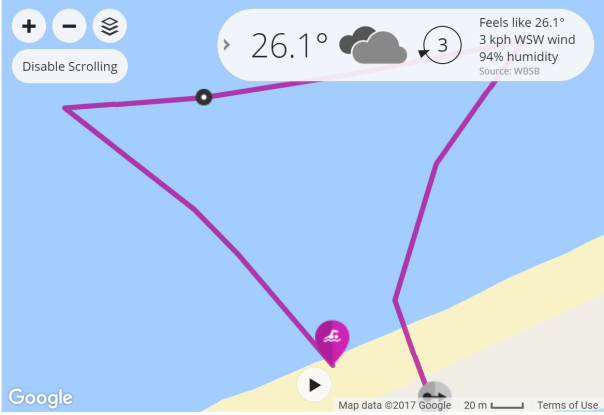 On the shore, a few hiking/running buddies (bahadurs) as volunteers jokingly asked me to do a baywatch run, and I obliged. :p

In the first transition, I wore my lunar sandals for my bike, remembered to wear my helmet, but forgot to wear my bib as I only realized halfway when I saw someone else didn’t wear it. fortunately the organizers were lenient on the regulations.

Beginning of the bike was challenging as it required to cycle up a hill, I was a bit used to it, so I just went on passing 2 cyclist, 1 was pushing the bike up, and another had to drop to wear the cleats properly. Cycling was a good average of 24.2kmph getting in under 1 hour, I did stop by as a fellow cyclist’s pedal dropped off, tried to assist, but didn’t have the tools, advised him considering he had cleats, then he could just pedal with one pedal, and he did. 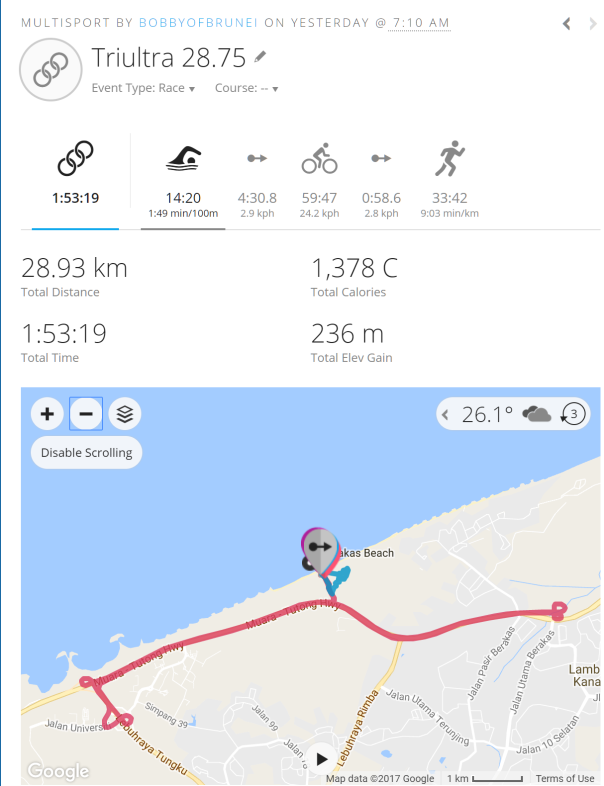 Running was okay doing 4km in 33mins, or pace 9. I haven’t done run brick runs in a long time ( as well as other trainings), so I ended up doing walk runs, knowing the running route quite well, I walked up hill and ran down hill. I was thank full most of the route was shaded..

At the end I was expecting my wife to have started her run already, but I asked the volunteers and they havent noticed her, I checked for her bike but I hasn’t arrived yet. Apparently she had a tire puncture on the road about 7km back. fortunately there were cyclist passing by that assisted her. but shew was 30mins later than expected. So as she arrived, I accompanied her during her run.

At the end of the day my wife felt tired from doing her first triathlon, but I still had energy to conduct a swimming class. but my body ached almost like it was doing it the first time. Thankfully my shoulder has recovered enough that I can continue my training for Langkawi Ironman end of this year.