← Day 21 – self control, another swim class and a late night run
Day 23 – family tahlil, emotional/inspiring songs and another big break →

Day 22, morning at the beach, a mindful break, and the Gods must be Crazy

The morning woke up early to send my wife to her Stand up paddle board class. This time around it was at tungku beach. The water was the calmest I have ever seen. Tempted to go into the water myself, but didn’t.

Afternoon mostly rested, and caught up on my sleep. Before going out to buy some groceries and some food for the break.

During the break, again being mindful of what I ate. Started of with finishing a 750mL mug of water, thinking it might help me feel full. At the end I felt my stomache was full, but my throat felt like it wanted more. Ate a few more kurma in an effort to satisfy the need for something sweet. I recognize that the craving is probably my body trying to balance off my daily calorie requirement, despite my stomache already feeling the fullness. Fighting off or at least resisting the craving is a key for weight loss through fasting and calorie restriction. But it really helps knowing and reminding that a binge or cheat day is coming soon.

It started off with a documentary type of introduction on how simple the life Kalahari tribe in comparison to the ridiculous modem day life, where people are controlled by the clock  and then transitioned into straight men comedy or antics by the Kalahari guy along with the Caucasian protagonists. There was also parallel storyline about an attempted assassination gone wrong,  where the antagonists were being chased by the military and police, which the storylines combined at the end of the movie. 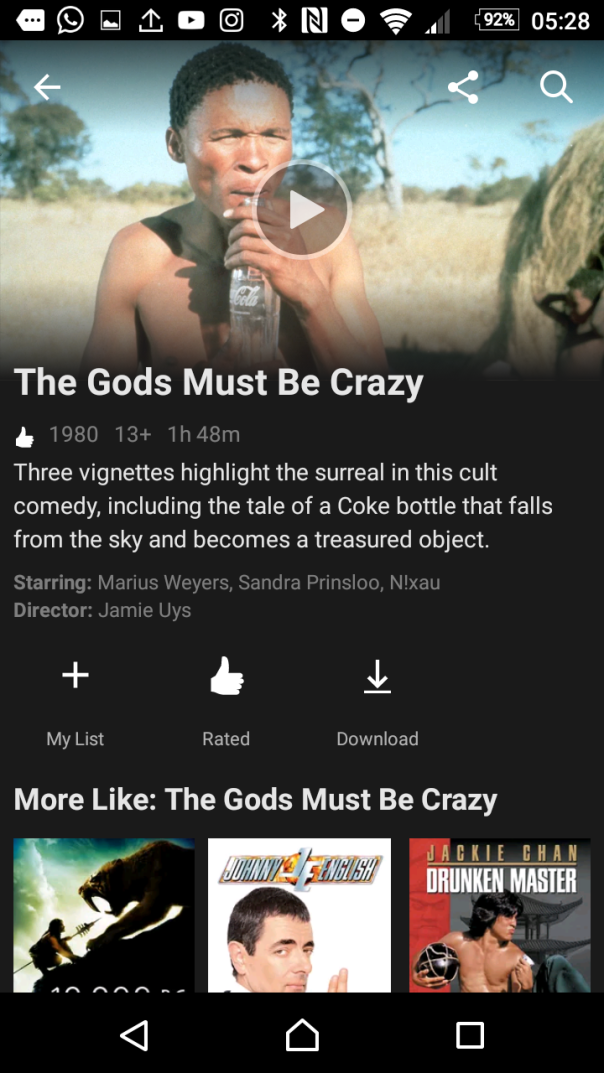 I wondered how much of the information depicted in the movie was true, from the culture of the kalahari tribe at that time, to how some other tribes saying yes with a headshake instead of a nod, to a rhinoceros self appointing itself as a a fire prevention officer.

I know its a movie, but sometimes art imitates life. So I checked it out.

The headshake may be true, as a few cultures in the world does it. But wikipedia doesnt mention specifically the tribe in the movie.

https://en.m.wikipedia.org/wiki/Head_shake
The culture of the kalahari tribe, more specifically the !Kung San tribe (the !K is a cork pop sound) is admittedly an “exaggerations of their almost abandoned hunting and gathering life” according to the wikipedia article on the san people.

The depictions in the movie is a caricature of the culture, to findout more you may read the article on the Kung_people.

And finally, I was disappointed to find out the fire stomping rhino to be a myth based on a legend, that a few indigenous groups propagated.

Posted on 2017/06/18, in Uncategorized. Bookmark the permalink. Leave a comment.

← Day 21 – self control, another swim class and a late night run
Day 23 – family tahlil, emotional/inspiring songs and another big break →