Woke up comfortably as I took a day off from work, so there was no urgency to wake me up. I decided that today might be the only day that I could easily and comfortably go to Miri to look for and buy my road bike.  Considering it is a week day, the lines to cross the border was short and smooth. going there and back. It is important to note and share that the border closes about 5 minutes before the break time, and opens up 30mins later.

I have been able to obtain a budget for my bike and I have been considering what bike to purchase. One of the reviews I found was a review from bikeradar in the video below.

I remember seeing 2 bikes in this review in this last one year, when I was just window shopping. The Specialized Allez E5 Sport in november last year, and the Giant Defy 3 when the Giant Bicycle shop opened up early this year. Unfortunately when I checked this time around they weren’t in stock.

Based on my  research, the criteria for my selection were:

So of we went in search of the right bicycle. In Brunei, it is either a bit more expensive, or (and here is the main reason) they don’t have in my size in stock. So they would need to order it. So went to Miri.

Unfortunately, the Specialized Allez E5 Sport wasn’t available, the closest to it was the E5 Elite, it had a Tiagra 10 speed, but a 11-28T, meaning the climb wouldn’t be as easy as I would like. But at a Price of MYR4300.  more than my budget, but it was under consideration. 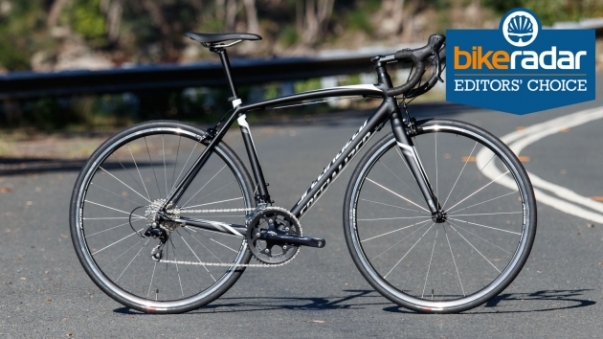 Next was looking into the Giant Defy. Unfortunately it wasn’t in stock, but the storekeeper said they can have it ordered and arrived in 10 days, with a MYR500 Deposit, for a total of MYR3800 (I think, as I forgot to note it down), He did recommend a Giant Contender SL that was in stock. It also had Tiagra instead of Sora, for the price of MYR 4200 (again at this point, I forgot to write down notes). I was consdiering that if I couldn’t get the right bike today, I wouldn’t mind ordering mine from here. I just need to dropby miri again in 2 weeks time. 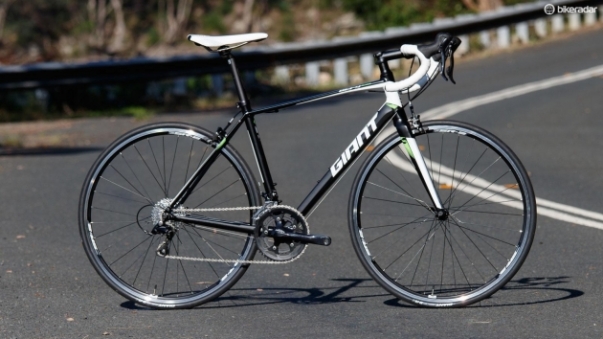 Finally, went to the same shop where we bought my wife’s roadbike. I remember they had the s40, that have the Sora 9 speed with 11t-32t cassette. But I also remembered checking it out and found poor reviews, mostly on the weak breaks. But upgrading from a Urata road bike, anything else would be an improvement. When we went to the shop, we did find the s40, and it was in my size. So I was tempted for MYR3800. But the sales guy recommended to go for s30. A similar version, but it has Tiagra with the same cassette. and offer price of MYR4000. With that small price difference, I wouldn’t mind changing my decision to the s30. The salesperson tried to upgrade me to a cheap carbon roadbike for MYR6000, I was tempted, but, as I only budgeted for MYR4000, I was just gonna get the s30. In a review I read the casssette was a 12t-30t, but this one had my desired 11t-32t. So I settled. 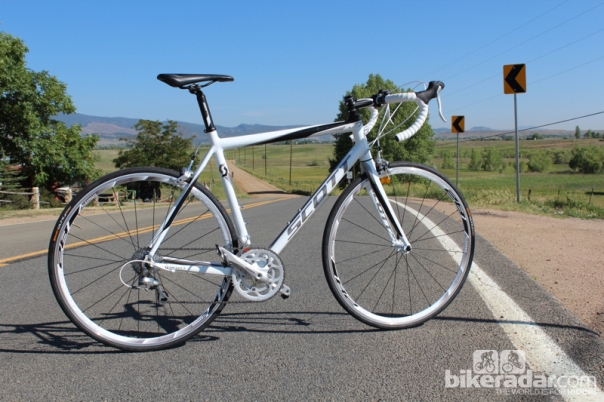 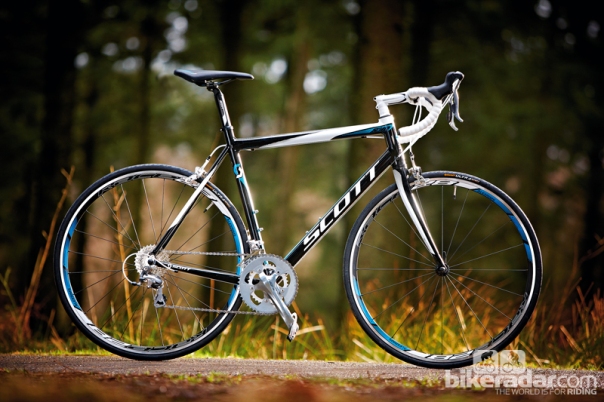 We bought Pizza Hut and and some chicken wings from Miri in order to eat on the way back home. We also bought some famous amos cookies, but we were only able to eat the pizza, not the cookies. I guess we will leave it for the next day.

That night I had a swim class, and I planned to cycle after that. Either I joined a Sahur Ride planned by a group that evening, or I could test it out at the stadium. When I left home I realized that my phone line hasn’t been changed back to my Brunei line from my Malaysian line. I decided it was to dangerous to ride solo to try to catchup to the sahur ride heading towards jerudong, so I settled to ride around the stadium, in that case if my bicycle broke down, I could easily just walk back to the car. 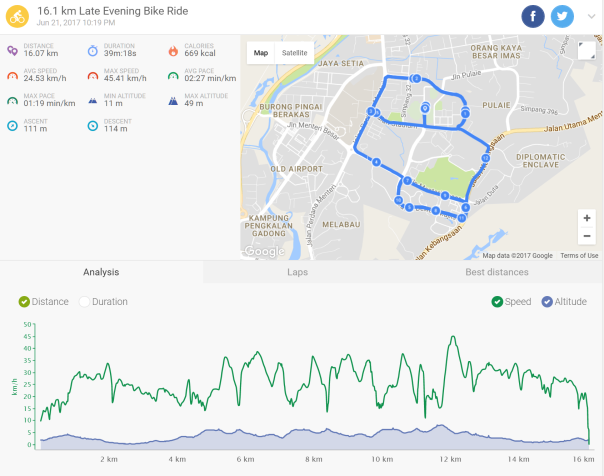 I rode kinda randomly around the stadium, and went to the Audit area to test out the climbs and descents. Among the things I noticed were:

After biking for half an hour, I decided the test was enough, and I would actually like to have a bit of a run. so I ran a mile route around the swimming pool area. Other than the groin numbness that dissipated after a few minutes, I felt I could run well enough. Despite not having a lot of Brick runs in recent months, The run was okay, and I could push myself a bit. 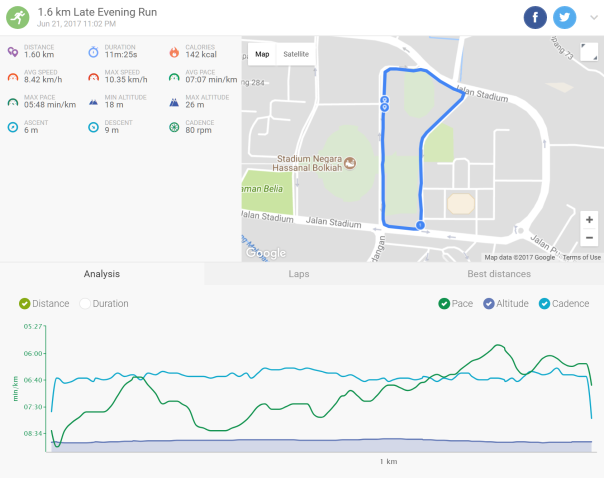 At the end of the run, again I cooled down with a few stretches for my back muscles.

Going home, I went through the long route to see if can spot the sahur ride group. unfortunately that road had a traffic jam caused by a police road block. I spotted the sahur ride group at 11:30pm, just passing by empire hotel. So I guessed they arrived at Jerudong Food Court at about 10:30pm, and left there just after 11pm.

Arrived home, but couldn’t go to sleep until 1am in the morning.  Woke up earlyish the next morning to go to work.

Posted in Cycling, Diet and Nutrition

Day 25 – Waking up Late, Meeting, and Heaviest Iftar Yet

Somehow I woke up late today, after almost the whole month of waking up early. My guess the lack of sleep on Sunday and Monday caught up to me today. Didn’t wake up at all. Slept through my alarms. I was late for an early morning meeting, thankfully it was moved up to a later time. Decided to take a leave the next day to catch up on rest on the next day.

Afternoon, my wife went grocery shopping for cooking and juicing for the next few days. After that went off to a Restaurant to have our break with my wife’s favorite cousin and husband. Initially, I was going to do what I usually do at buffets, which was in general taste every single food available. But somehow this time I was a bit more selective. Took a spoonful of selected foods, but my plate ended up full anyway. Another strategy is to not drink so much, as liquid will make the stomach full faster. At the end, I had a mix feeling about the end of the buffet. On one hand, I was disappointed, that I couldn’t eat as much as I used to, either a sign of age, or a sign that my stomach is shrinking. On the other hand, I was relieved to know that my stomach can actually shrink, so I am unable to eat to binge or glutton as I used to. Specifically, I used to be able to do 3 rounds of the main course, and have some space for all the desserts. But this time I could only do 2 rounds of the main course, and a bit of space for some desserts. The food that I specifically ate were nasi lemak (fatty rice? oily rice?), fried noodles, crab, chicken, fish fillet, (hey I just realized there wasn’t any beef),  some water melon and papaya, some cakes.  I think drink too much water after eating a lot of food that were expandable caused my stomach to be bloated and caused some discomfort.

I went to the toilet twice to release pressure and for some bowel movement. Technically 3 times as one time I went to the lobby toilet, but it was being cleaned with a sign stating “please go to the 1st floor toilet”, but I went up and found a similar sign but stating “go to the lobby toilet”. So I had to wait a bit longer. But  after the meal was done, Me and my wife decided to walk it off, as my wife was looking for a comfortable walking shoe. Another annoyance came as we walked to one shoe shop that had a sign saying it closes at 10:30pm, but at 9:52pm, the closed sign was already turned. Well no sales for you from us then. Thankfully as the night went by the stomach ache subsided. But I remembered that during the meal, I didn’t drink much. I have a slight fear that when I fast, I would be dehydrated, so I forced myself to drink water, but taking care not to overfill the stomach. That night I slept like a log.

Posted in Diet and Nutrition