Last minute preparation for BUKUM 2019 115km. I downloaded and set up the route maps for 30km, 60km and 115km as a public course on garmin. So anyone with a garmin device should be able to access it and add to their device easily. Links are at the end of this post

The map shown in the BUKUM Intagram at instagram.com/BruneiUltraMarathon and facebook on facebook.com/bruneiultramarathon is not so clear.

Thankfully they also posted on their social media a QR code and a link to the png picture files and route gpx files on bit.do/BUKUM19-MAP but I had a few issues…

It was tricky but information on how create a course from a gpx file is available on the garmin website at https://support.garmin.com/en-US/?faq=tWx3JQyjlU474jqa91EJs8

Difference is, the help files tells you to use the desktop garmin express and connect using the charger/data cable. But I found that I could do it all on the phone, using a “desktop” browser to access the garmin connect website, import the gpx file, edit as necessary (like the name), save it as a course, and then send it to device, and then using the mobile garmin connect app to check and sync.

Finally, the moment you have been waiting for (thank you for reading through and not skipping)

Upcoming Runs in Brunei for the last half of 2014

Looking at my last few month’s performance. I told myself I need to get my game back. One of the few ways I know in order for me to keep at it is by registering AND paying for events in the next few months, that will motivate me to train for those events. So I searched and I found a few events.

I have already registered for these events.

I have yet to register for the following events

I have to set my schedules, so I can partake in this events.

This morning seems to be full of posts about Brunei vs Indonesia… not the football match itself (yet), but about the queuing.

At first glance I was a bit embarrassed and disappointed looking at my Bruneian fellows in a chaotic state, as if they weren’t considerate nor courteous. Unlike our Indonesian counterparts as shown below in a pic from one of the posts. I guess, the indonesians respect (or fear) the authorities in this country that is not theirs, that they queued willingly which seems without any help from the authorities.

But looking further, I imagined myself to be in the Bruneian “queue”, I find myself confused and a bit worried. I arrive there seeing the chaotic state, not knowing the head or tails of the queue. Considerate or not (which I believe I am), I would be in that crowd.

I guess our culture or entitlement is at play here. But also that the authorities were not prepared to handle this amount of crowd, and therefore were left short-handed to handle such and event. When it comes to System vs People, it is the system that guides and controls the people. How else would you explain places like MacD being able to train a (often rebellious) teenager to make the same burgers and fries consistently.

I also see post of complaints on how the tickets are finished or not enough, and some are blaming corruption (people inside reserving for other people). I am not really a football fan, but for this event I personally think that the tickets should have been charged, even if one dollar. But preferably a range price (from $5 to $50) for a numbered seat. It would reduce freeloaders, reduce the jam, get in the true fans, and make this event sustainable and even profitable.

The stadium can fit 30,000 people. even if they charged $1 there is $30,000 in revenue, how much does it cost to print the tickets? or hire guards? Oh how that money could be used to renovate the stadium or other costs? This is the final match, between two countries that relatively populate brunei. I bet real fans or even just patriotic nationals wouldn’t mind to pay.  I don’t remember clearly, but I think during the Brunei vs Serawak  in 1999, the tickets cost quite a sum, I remember family mentioned that they paid $100 for the whole family to get in the stadium. The stadium was packed, Brunei won. It is an experience that most people yearn for, to be there, to be a part of something that matters.

I am not a stadium manager, but I am in Business, it is not just about making money, it is about providing value and being sustainable to continuously be able to provide that value. I see that this match provides entertainment, and to the side that wins, gets pride and glory.

I may be a bruneian, but I am in no favor for either side. I can only expect that the best team wins tonite. Congratulations to the winner, and congratulations to all those who got the ticket, for being able to bear witness to this momentous event. 🙂

Bday (not mine) at Escapade Sushi

First time I experienced someone’s bday was celebrated at Escapade sushi, Just a warning, even if the person was aware its his bday. He might still be surprised.

Comments Off on Bday (not mine) at Escapade Sushi

On 20th June 2010, sunday – the olympic day run was held. The Starting line was at the Indoor Stadium and the Finishing Line was at the National Stadium.

The event started off with a warm up /stretching exercise.

The starting horn was sounded off by His Royal Highness Prince Haji Sufri. 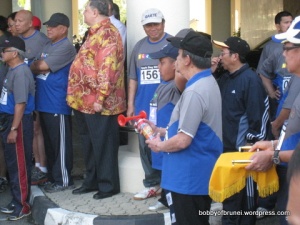 Even the prince participated in one of the categories. 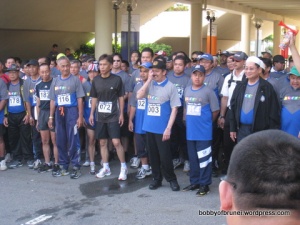 Depending on the categories, the distance and routes were different. 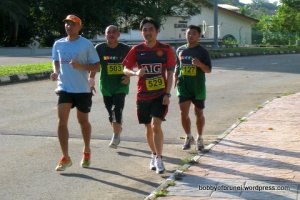 The finishing line was at the front of the national stadium berakas. Where volunteers kept track of the runners that finished.

The runners and volunteers rested while waiting for everyone to finish. 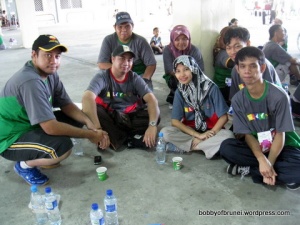 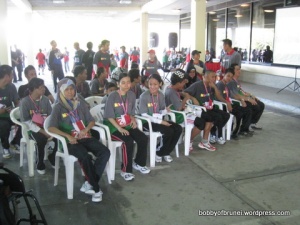 All runners that finished were given a certificate stating that they participated in the olympic day run.

In the closing ceremony, his highness was asked to present prizes to the top runners in the various categories. 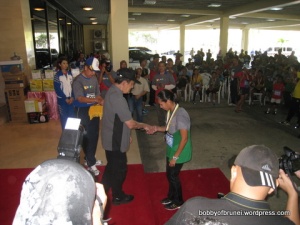 If you were a participant in the event and you want to tag yourself. you can go to my facebook photo album.